Chili is the hottest pepper in the world and every year it is always added with new, spicier variants. On this occasion we will share information about the Hottest Peppers in the World. Hopefully useful!

Every year there is always a new chili that tastes spicier, so check out this information every year to find out what the hottest chilies in the world are today.

We’ve put together an updated list of the Hottest Peppers in the World. We take from various trusted sources to provide useful information for all.

We also suggest that you can name this spicy chili in your home or yard, you can feel how the heat level is given by the little red.

let’s see which chili is included in the latest Hottest Pepper in the World list!

SHU = Scoville Heat Unit, this is the measure or level of spiciness of a chili. Pepper Scoville Scale displayed as Peak SHU Values

So, how hot a pepper is is measured by the high level of capsaicinoids in the peppers and the unit is SHU.

Capsaicin is the chemical responsible for giving peppers their spiciness. So, the higher the capsaicinoid content in the pepper, the hotter the pepper will be.

So, which chili is the hottest in the world? Let’s take a look at the list of Hottest Peppers In The World, the latest and updated rankings. 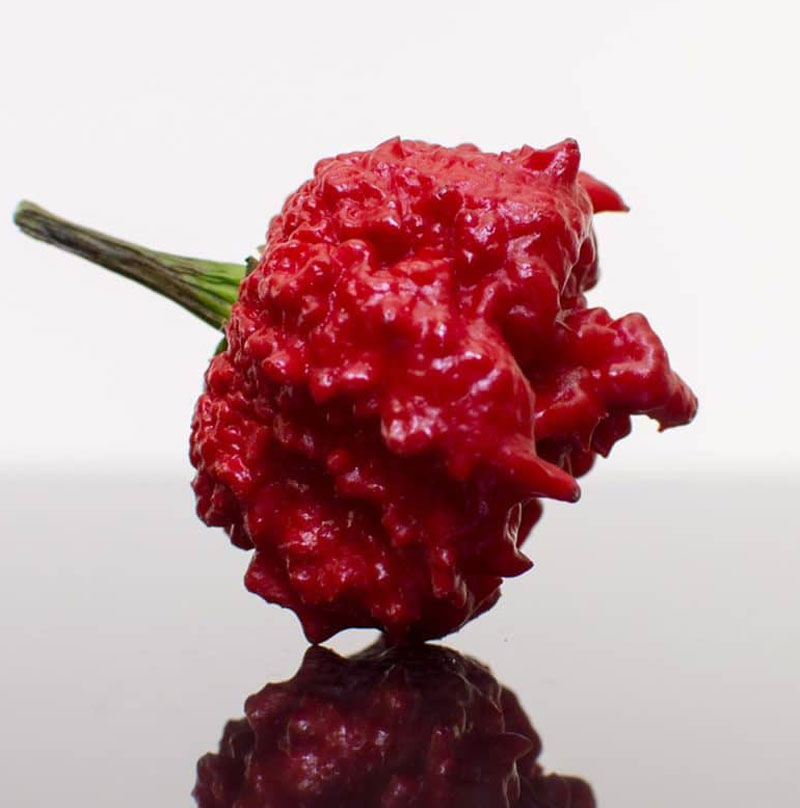 The former world champion, the carolina reaper is once again the hottest peppers in the world today.

In 2013 Carolina won the hottest chili contest in the world, then in 2018 it was tested again and proved to be the chili with the highest SHU, or even higher up to 71,000 SHU than before. It gave it the highest marks and now the carolina reaper is the hottest pepper in the world.

These peppers are indeed cultivated as the hottest chilies in the world and the goal is to produce the highest level of spiciness of chilies. Its capsaicin level is 1,641,000 SHU and peaks at 2.2 Million SHU!

If you look at the picture above, you know that the carolina reaper is a unique and very spicy pepper. It has a pointed stinger tail, unlike other types of pepper that do not have this tail.

The spicy level or high capsaicin in this Carolina pepper increases after a cross between Ghost pepper and Red Habanero occurs. Not only hot, but this pepper also contains a fruity taste.

Tasting it can burn your face and it’s absolutely insane.

Now the Carolina reaper hottest pepper can be found easily in online stores, you can buy the powder, or the seeds or plants that you can plant in your yard. 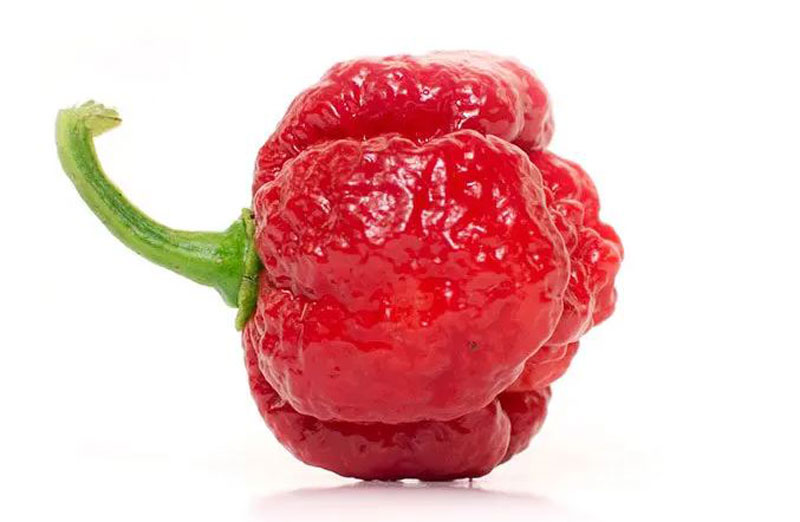 The Trinidad Moruga Scorpion is another very hot pepper and the spiciness level is 2,009,231 SHU. This is a rare and highly sought after pepper in Trinidad.

This pepper is native to Trinidad and Tobago. If you dare to bite into this pepper, then you will feel spicy that is unrelenting.

Indeed, it is different from the Carolina Reaper because it doesn’t have a pointed tail, but the Trinidad Moruga Scorpion has almost the same spicy level as Carolina. 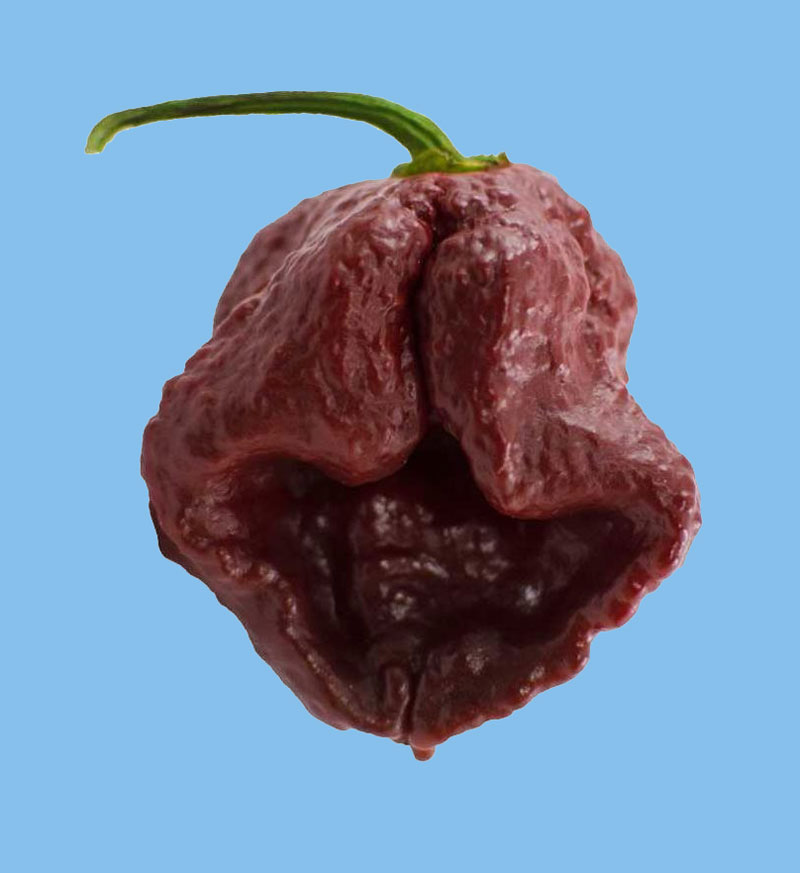 In the pepper community, 7 pot douglah is known as the hottest pepper but has a good taste compared to the carolina reaper and others. This pepper has a spiciness level at 1,853,936 SHU, it is under the list of Moruga Scorpion.

Among the hottest peppers with an unlit color are 7 pots of douglah. The color may be a bit blackish, but the taste is unmatched on the tongue.

Its slightly blackish or brown color makes it a pepper that many in the lyrics of because of its unique nature. Usually hot peppers are red, but this habit is challenged by the presence of this 7 Pot Douglah Pepper.

In addition to the name 7 pot douglah, the hottest pepper in the world is also known as the chocolate 7 pod or 7 pot brown. Maybe you don’t know the name 7 Pot Douglah but have heard the name “7 Pot Brown”. 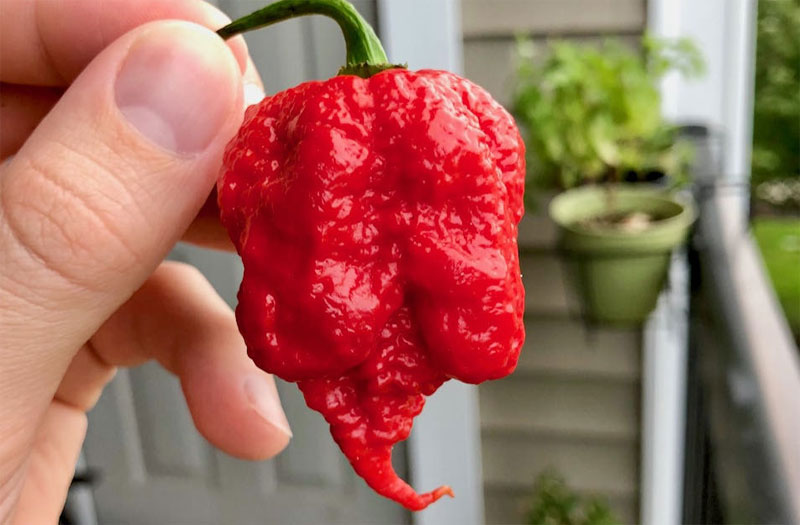 Furthermore, the hottest pepper in the world is 7 Pot Primo with its capsaicin level at 1,469,000 SHU.

This chili is also similar to the carolina reaper with a longer pointed tail on the back.

This pepper is made by a horticulturist named “Troy Primeaux.”

In addition to these horticulturists, some agricultural experts have tried to make this pepper with other crosses in order to produce a longer pepper. 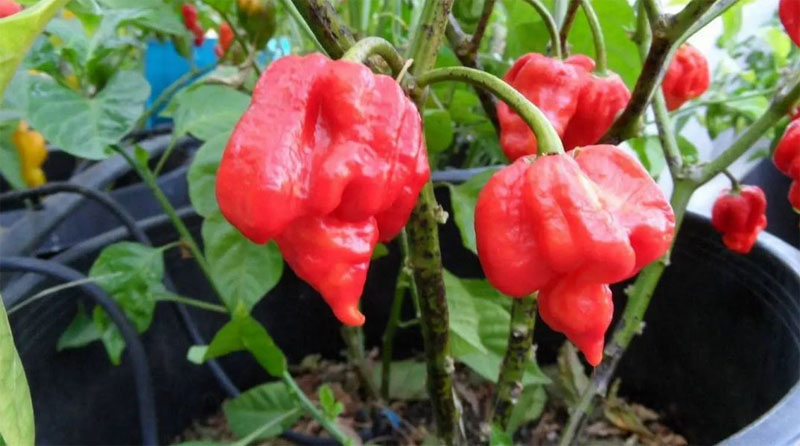 Besides the Moruga Trinidad scorpion, there are other peppers from Trinidad which are also included in the hottest pepper in the world. This is the Trinidad Scorpion “Butch T” with its capsaicin level at 1,463,700 SHU.

Why does it have the word “scorpion” in its name? This is because the spicy taste stings like a scorpion bite.

The spiciness of the Trinidad Scorpion “Butch T” is unlike any other pepper, it is very hot and will make you bitter.

At number 6 as the hottest pepper in the world falls on the Naga Viper pepper with a capsaicin level of 1,349,000 SHU.

Naga Viper is the hottest pepper that is cultivated from England. In creating this spicy pepper variety, experts had to cross-pollinate for years.

Then, as the hottest pepper in the world held by ghost pepper with a level of spiciness at 1,041,427 SHU.

This pepper is also known as “Super Hot”, due to the many advertisements promoting it as the hottest pepper in the past. The popularity of this pepper ghost was very well known on social media at that time, including on youtube, and others.

Among the one million scovilles tested, Ghost pepper came out as the hottest pepper in the world at that time, before being born with more spicy pepper variants.

It also comes from the country of Trinidad and Tobago, precisely cultivated in the city of Chaguanas.

So, there are many types of hottest pepper in the world originating from Trinidad and Tobago.

Another hottest pepper with the same heat level as Barrackpore, this is 7 Pot Red (Giant), it has a spiciness rating of 1 million SHU.

The pepper at the bottom of the hottest pepper list is the Red Savina Habanero with a heat rating of 500,000 SHU. Maybe this is the least spicy, but if you bite, your face can turn red.

However, the Red Savina Habanero was the hottest pepper in the world from 1994 to 2006 before more peppers were born with a spiciness level above 1,000,000 SHU.

For those of you who want to make spices that are not too spicy, using Red Savina Habanero is the best. It has a good taste and a reasonable level of spiciness.