Do you often buy rice milk at the store, maybe in an emergency sometimes it is difficult to find rice milk even in the store. What should you do? Is there a healthy substitute for rice milk out there?

In this post we will find out more about rice milk and the best substitutes for rice milk. In fact, we will share with you how to make your own rice milk which is healthier. By making your own, of course you can save expenses up to a few dollars. Interesting right!

What is the best substitute for rice milk?

Rice milk is milk made from rice, it has a sweet taste, low in calories and very good for health.

The process of making rice milk is to cook rice with water, then grind it finely, then mix this rice powder with water to produce a milky liquid, this is what is called rice milk. 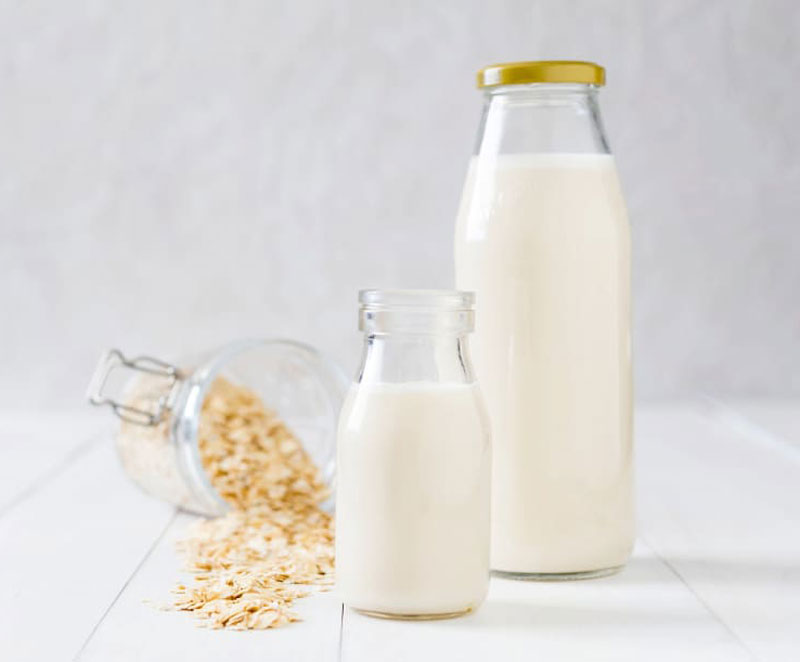 The consistency is thin (not thick) and is often used in cake making, and is very good as a substitute for cow’s milk.

Even the use of rice milk is also visible in savory dishes such as soups, sauces. But the important thing to note is that sometimes it is difficult to find rice milk. Therefore many are looking for the best substitute for this rice milk in various recipes.

1. Almond milk instead of rice milk

Almond milk has many benefits and uses, and is usually the best alternative to animal milk. It tastes savory, light and creamy so many people like it.

As the name suggests, this milk is made from almonds and water. Sometimes there are additional sweeteners, thickeners and flavours. Remember, almond milk that is natural and unsweetened is much healthier.

In many recipes, almond milk is used as a substitute for cow’s milk, especially as an alternative for those who are lactose intolerant or allergic to dairy products. Apart from that, almond milk is the best choice for vegans, we recommend you replace rice milk with almond milk.

Almond milk contains the same amount of protein as rice milk, so it is lower in calories and lower in cholesterol. So, it’s a better option to replace rice milk.

Almond milk can be easily found in supermarkets, you can find it on the dairy shelf. Almond milk is also available in many flavors such as vanilla, plain, and chocolate.

Almond milk is also often used as a substitute for cow’s milk as well as rice milk in replacing cow’s milk. To replace cow’s milk, almond milk is usually added in coffee, cakes, and cereals. Can also be used as an ingredient for the manufacture of cheese and other vegan foods.

Since almond milk is lighter, to find the same consistency as rice milk, you can add a little thickener like cornstarch.

Then, you need to know that almond milk is sweeter than rice milk, so you have to add less almonds.

Soy milk is a type of milk made from soybeans, its consistency is thin, watery and slightly spicy. It is a source of protein and calcium. You can use it as a substitute for cow’s milk, especially for those of you who are lactose intolerant. The use of soy milk is also found in non-dairy ice creams, cheeses and yogurts.

Another best substitute for rice milk is oat milk. This is plant-based milk from oats that are finely ground and then added to water.

Oat milk has a savory and creamy taste, it’s as good for baking as using cow’s milk. Good substitute for cow’s milk either for cooking purposes or for the purpose of delicious coffee and tea.

Oat milk is also a good source of nutrients such as minerals, vitamins, calcium, potassium, and vitamin D. Oat milk is a type of milk drink made from ground oats. It is the best choice to replace rice milk.

4. Milk can also be an alternative to rice milk

Plain milk can also be used as the best substitute for rice milk in some recipes. Regular milk may be thicker than rice milk, so adjust the amount of regular milk instead of rice milk.

Rice milk, some also contain sugar, so diabetics should be careful with rice milk which contains sugar. So pay attention to the packaging when you buy rice milk. 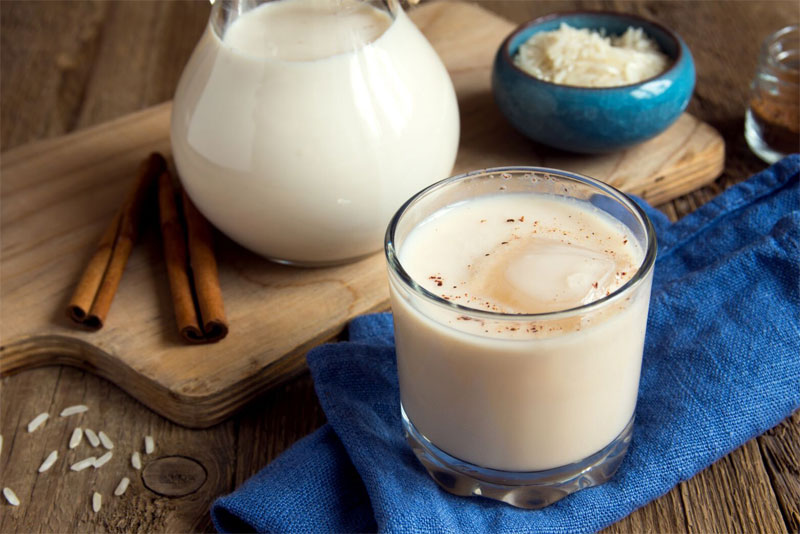 If you are looking for a dairy-free substitute for rice milk, then horchata is the best choice to replace rice milk.

Horchata is made of almonds, ground rice, cinnamon. This is the right ingredient to add in coffee, tea. It’s very easy to make at home and in just a few minutes you can have a delicious cup of KPI with the addition of Horchata.

Horchata is a refreshing and very tasty drink, it originates from Spain. It has a sweet and spicy taste and has a hint of cinnamon in it.

How to make horchata is to soak the rice overnight. Next, drain the rice, and mix it with the almonds, sugar and cinnamon. Adding cinnamon in horchata is great for improving health.

Add water, milk until you find the same consistency with rice milk, refrigerate for an hour. Now you can enjoy horchata with additional ice cubes. Also use creamer in your coffee or tea.

Horchata is the best substitute for rice milk from non-dairy products, and it’s perfect for mixing in cocktails.

Horchata has a unique, creamy taste, and of course the last one is addictive.

6. Use coconut milk instead of rice milk

Coconut milk is a white liquid extracted from the flesh of the coconut fruit. Rich texture, rich coconut flavor in curries, desserts and in a variety of tropical dishes.

Coconut milk is a liquid that is very high in saturated fat, and it is great for cooking. The fat content in coconut milk keeps your food moist, and prevents spoilage.

The uses of coconut milk are:

If you want a dairy-free option to replace rice milk, then using coconut milk is the best alternative. Be sure to use full-fat coconut milk for best results. 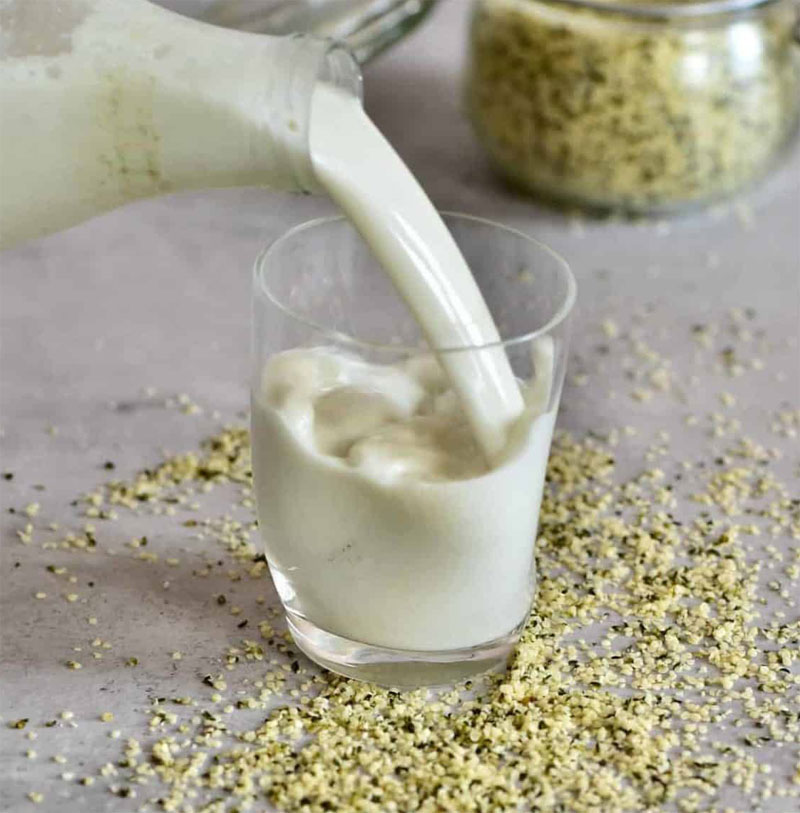 Furthermore, the best substitute for rice milk is hemp milk. Hemp milk tastes more delicious, rich in nutrients, this is the best alternative to cow’s milk even the taste has a nutty aroma.

It is also one of the dairy-free milk substitutes for rice milk. This milk is made with hulled hemp, it is a great source of protein, a source of essential fatty acids, and a sugar-free source of calories.

Hemp milk also includes multipurpose milk which has many health benefits and is a substitute for rice milk. It can be used for baking, shakes, smoothies, and enjoyed on its own.

It has a slightly spicy taste and is a substitute for cow’s milk in many recipes. You can also add hemp milk to make lattes, frappes, and other coffee drinks. For those of you who are lactose intolerant, hemp milk can be the best substitute for rice milk.

You can use the same measure as using rice milk. Hemp milk is runny and it can be refrigerated to last for a week, once opened it can still last for a week in the fridge. But to last longer, you can freeze it in the freezer.

How is rice milk made?

Ingredients you need to make rice milk at home:

Rinse the rice in a fine sieve, mix it with the water in a medium saucepan, then bring to a boil over the top, stirring occasionally. When it boils, reduce heat and simmer for another 30 minutes.

Rice milk can be stored in an airtight container in the refrigerator for up to 5 days, and can be frozen for up to 3 months.

If you are looking for rice milk for buttermilk, then almond milk is your best choice. You will need to add a little vinegar or you can replace the vinegar with lemon juice. Soy milk can also work well.

Beat with one cup of soy milk, one tablespoon of vinegar, or lemon juice, use as a substitute for buttermilk.

When you have to use other ingredients to replace brown rice flour, many ask, "is there a best substitute for...

Turbinado Sugar Substitutes - The Turbinado sugar is a sweetening condiment in some foods such as baked goods or other...