No Result
View All Result
Home The News

A Brief History Of Medical Cannabis

by Sarah Syakira
in The News
0 0

Cannabis is a family of plants that include hemp and marijuana plants. Marijuana has been used for thousands of years as a remedy for pain, being used as an analgesic in some cultures and even used by early occupants of America before it was criminalized during times of prohibition. In 1937, cannabis was made an illegal substance and getting caught with it could be risking jail and heavy fines. Many changes have happened in the last 30 years and they give hope to a lot of people who are in need of medical cannabis. Let’s go back and tell you the whole story from start to finish.

First it was okay, then it wasn’t. Cannabis has been used on the planet for at least 6,000 years. We’re quite sure of this because a bit of cannabis was found in a pottery jar, with food stores, in an ancient Chinese archeological find. Carbon dating is very accurate and tells us that the pottery dates back to 6,000 years ago.

1,200 years ago, we have written proof that was found which references the use of cannabis as a supplement for headaches, upset stomach, and inflammation. This is the earliest recorded information that proves mankind was already seeing the usefulness of the herb. 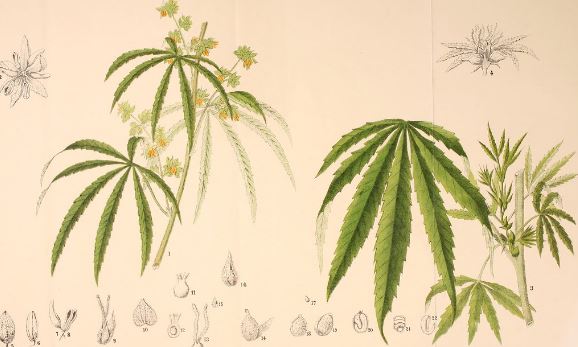 The usefulness of cannabis was well-known throughout the world and it was widely used in the USA as an herbal remedy right up until the time that it was made illegal. Why did that happen? There’s a lot of confusion and some people feel that cannabis was scorned by those in power due to the impact it had as a psychoactive agent, as alcohol also did through inebriation and was criminalized itself.

Others feel that it was the lumber barons and the cotton industry that lobbied for the criminalization of cannabis because hemp was capable of creating so many products that could have hurt their industries deeply. At any rate, in 1937, cannabis was taxed heavily through a cannabis tax act that was authored by Harry Anslinger – a big marijuana prohibitionist.

At the same time, a negative assault was carried out against cannabis by the prohibitionists that cast doubts on use. These were some of the same people who lobbied for the tax act.

It was labeled the devil’s plant and people were shamed into giving it up. Slowly, the public was swayed into believing the negative assault on cannabis, even though much of it was untrue. This is the way these things work, however.

In 1970, Richard Nixon signed the repeal of the Taxation Act of 1937 and officially signed the Controlled Substances Act, naming marijuana as a controlled substance, along with other class 1 drugs such as heroine, LSD, and Ecstasy. The official War on Drugs was started in America and cannabis became one of the first casualties. There was not a single mention of the medical use of the plant at that point in time. Even worse, hemp was lumped in with marijuana and both plants were doomed from this point on.

Many years went on this way, and the use of marijuana never stopped. It was simply driven underground and people have gone to prison for selling it and growing it. Some people have been sentenced longer for possessing a couple of grams of marijuana, while people who rape and engage in far worse acts are only getting probation.

The State of California Makes a Move On Their Own

California came forward as early as 1972 to create a ballot initiative that would again legalize cannabis in their state. This failed because of the public beating that cannabis had been taking from ill-informed people, a result of the campaign that started in the 1930s.

In 1996, however, Californians passed the Compassionate Use Act, giving those with medical needs access to medical marijuana under strict guidelines. Crime did not increase. It didn’t prove to be a gateway drug to harder drugs. Patients who used medical marijuana did, in fact, receive much relief from pain and seizures.

Things went so well that Colorado also passed medical marijuana law in 2008. In 2016, California voters then took things a step further and passed the Adult Use of Marijuana act that allows anyone of adult age to use marijuana medicinally or recreationally. Other states are following in California’s footsteps.

There are now only ten states left in the country that have not approved medical use marijuana. There are, as of June 2019, nine states that have made cannabis fully legal again.

Going Into the Future

To go even further, hemp was singled out explicitly in the Farm Bill of 2018, making it legal to farm hemp cannabis, possess hemp products, and use them. This widely opened the market to CBD oil and other cannabinoid oils that are extracted from industrialized hemp, such as those found at Vitaleaf Naturals

Farmers are growing hemp in record numbers and enjoying a brand new industry that is demanding more product like crazy. This could definitely help farmers and boost the economy, which is seeing some shakiness presently, due to the flooding in the farmland. Hemp is a crop that grows very fast, in about 12 weeks. It’s a very hardy plant and it may be a way for farmers to bounce back from losses in corn and soybeans.

The products are getting positive feedback, both types of products – those from marijuana and those from hemp. The world seems ready. It took about the same number of years for the positive talk to undo the negative talk that criminalized cannabis to begin with.

CBD products can be sold in all fifty states and medical marijuana can be used in all but ten states. Some of the ten have introduced recent ballot initiatives and we may see more changes as soon as 2020. Stay tuned.

How to Hire a Comedian For a Private Party

Live entertainment can add something really special to your next party. Whether you’re hosting a corporate event, birthday party, wedding,...

Cannabidiol (CBD) is one of the chemicals extracted from the marijuana plant. Unlike Tetrahydrocannabinol (THC), the primary psychoactive chemical in...

Does eating healthier mean you have to sacrifice flavor? Not necessarily. You can still make flavorful food choices while enjoying...

Most of us associate beef jerky with the rest of the junk food you get from the corner convenience store....

Hormone replacement therapy can help individuals as young as 30, 40, and sometimes even younger. This therapy will help these...

If you’re wondering about hiring a dumpster rental service in order to deal with a large amount of waste, then...